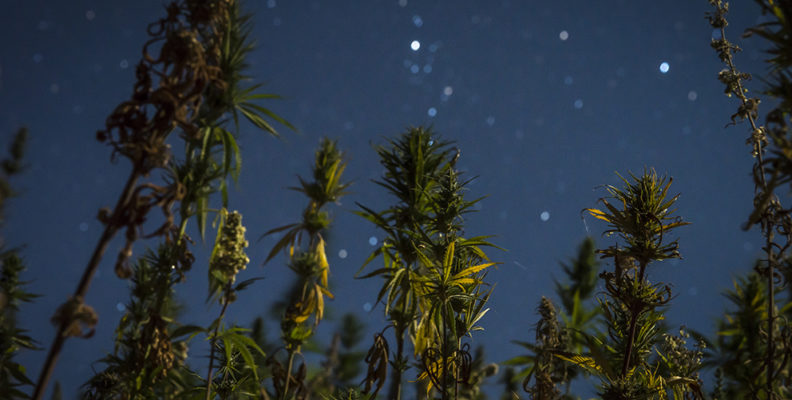 The spectacular setting, located at the very heart of the Rif Mountains, Northern Morocco, is a deep valley festooned with a rich variation of greens, from the native coniferous cool green to the reddish tonalities of vast marijuana plantations being harvested.

Right outside a hamlet of tin roof houses, several women sickle in hand hurry up short before sunset. Their children play catch among the hemp, the elder ones watching that the rest don’t get too close to a nearby cliff. Suddenly, the women halt the racket. As if out of the blue, an old man in brown hijab inspects the ongoing work. He seems pleased, thanking heaven, as he puts it, for “the best harvest in memory”. The kids slowly emerge from the plantation with submissive air, kissing the man’s right hand, whispering his name: Sidi Jamal. Shortly after, with the evening prayer erupting from a lousy sound system somewhere uphill, the women walk in line towards the houses carrying heavy bundles on their shoulders. 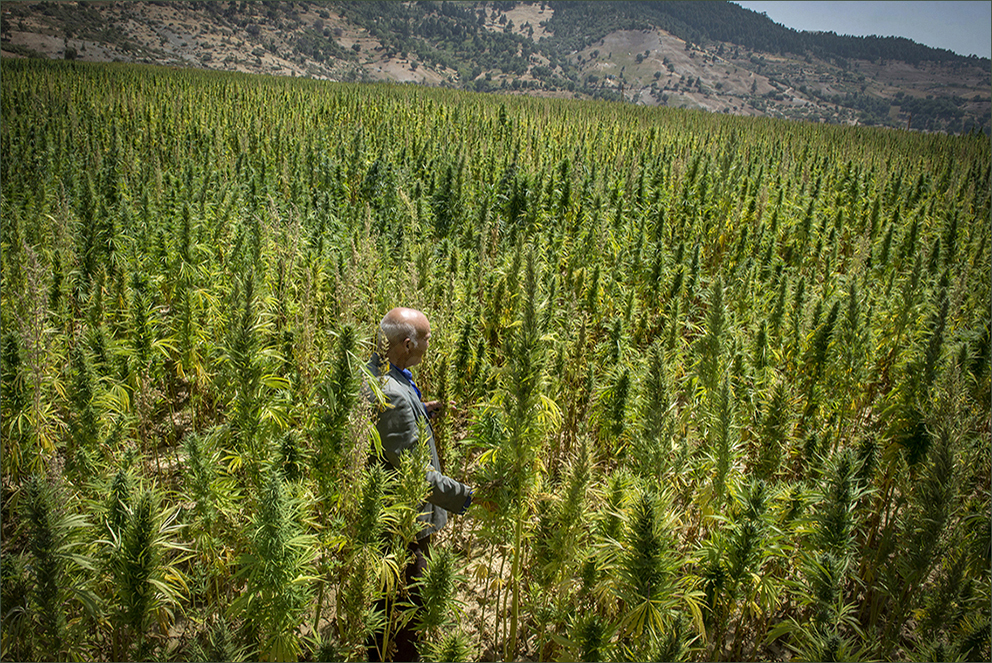 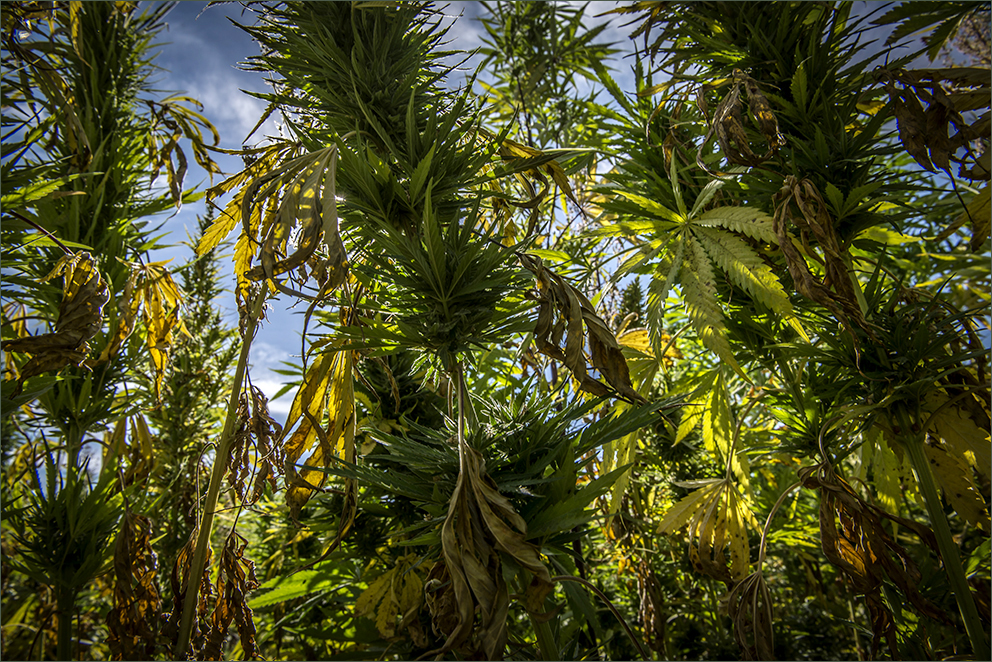 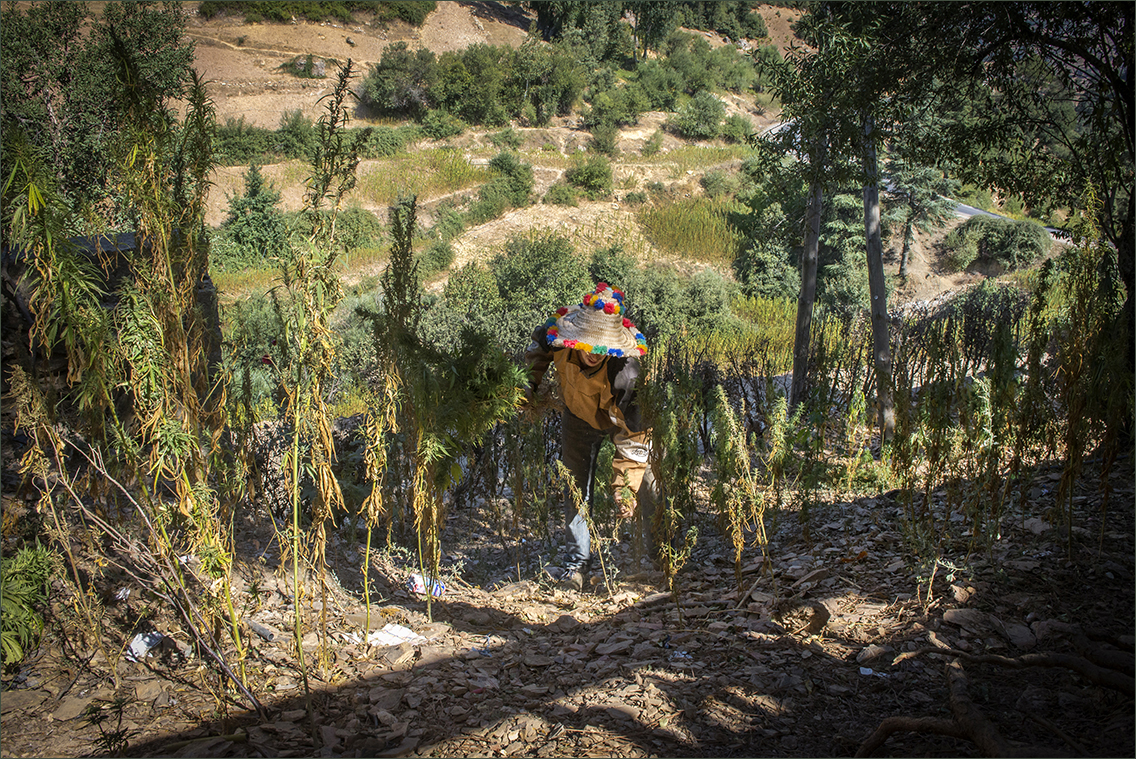 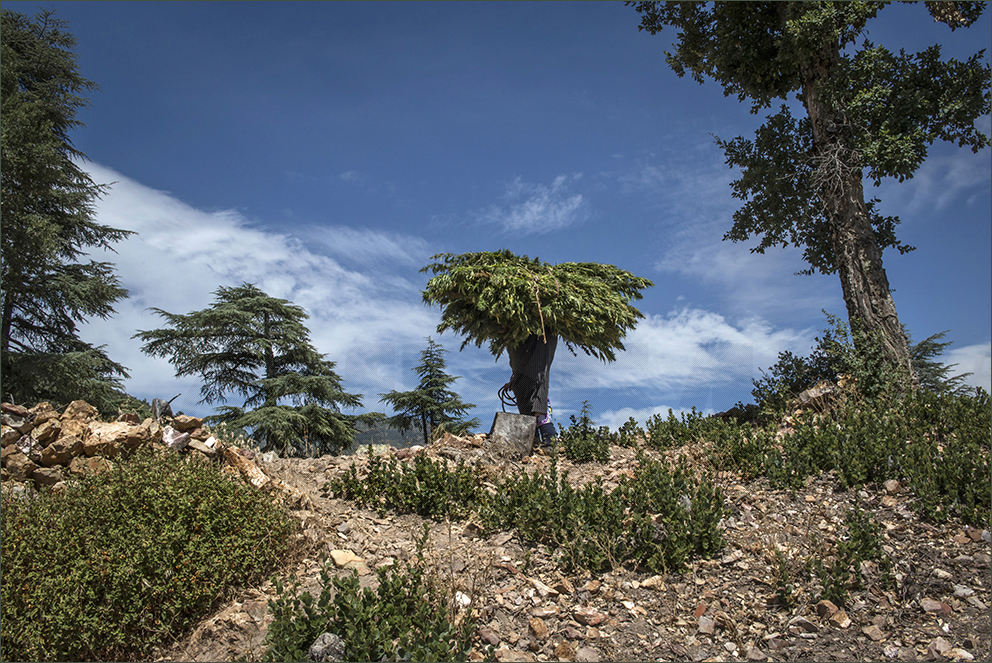 Earlier that day, in the outskirts of nearby Issaguen, the ramshackle market hub formally known as Ketama, the clientele of a crowded cafe terrace seems entranced watching the bus stop across the road. The sudden arrival of a long-distance coach from the coast animates the mood. The sight of a lonely Western backpacker stepping off leaves the tables empty. In a matter of seconds, the traveller is surrounded by a pushy swarm of candidates eager to take him to the “most wonderful mountain spot” he could ever imagine. A nasty brawl follows on who should take the guest along. Finally, a hefty young man seizes the backpack pulling its owner across town, into another cavernous joint sank in smoke, packed with cards and domino action. A smiling moustache at the back invites the newcomers over while filling three glasses with mint tea. The new host does not lose any time: “I bet you do surf”, he tells the baffled foreigner with a wink. A timid, almost imperceptible “yes” raises a loud toast that does not pass unnoticed across the tables: “Welcome to Ketama, amigo! Feel yourself at home”.

Next, as if hocus-pocus, a number of pebbles lie on the table, tonalities ranging from golden to jet black. The bean-sized pieces have also names: jamaican, pakistani, hardala, or “the best hashish on Earth”, as it is advertised once and again. The foreigner sees how one of the stones is thoroughly heated with a lighter and mixed with tobacco, but his reluctance to smoke the hand-made cigarette seems not exactly the right choice. Clearly at loss, tormented by the pasty effect of the sugary tea, the young adventurer finally masters his dry tongue to find an ace up the sleeve: “Kebdani. Jamal Kebdani. Do you guys know him?”. The question falls like a bomb-shell: “Kebdani?! C’mon man, to hell with the old loser”. Two domino players at the next table briskly stand up, demanding the foreigner to fetch his stuff and leave with them. Nobody around dares to discuss the order. Outside, the world seems suddenly engulfed by a thick fog. The trio gets in a shabby taxi made in Germany and disappear full gas down a ghostly road flanked by gigantic cedar. 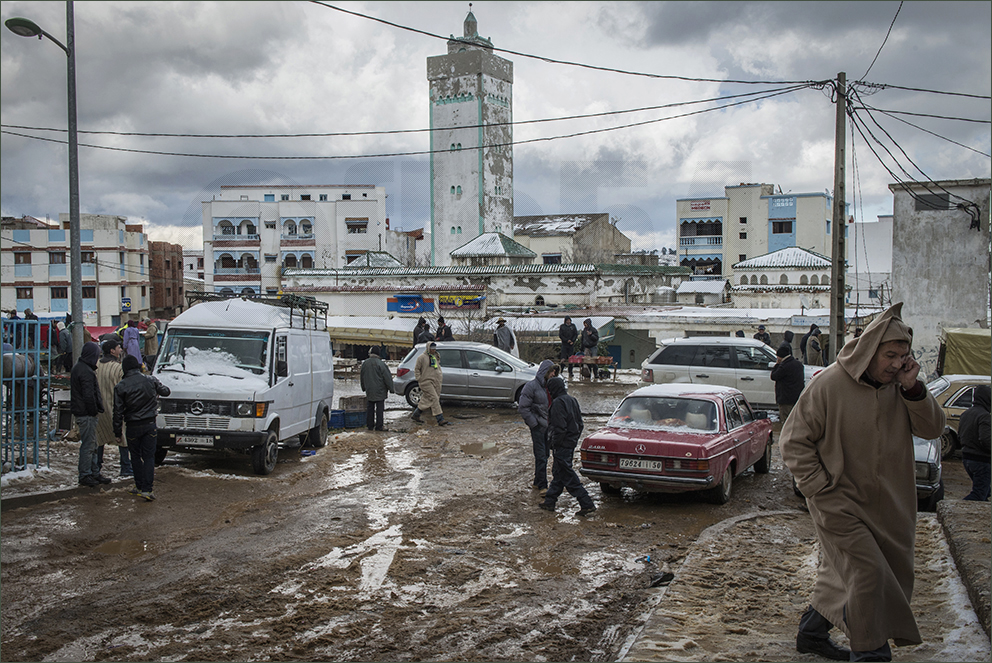 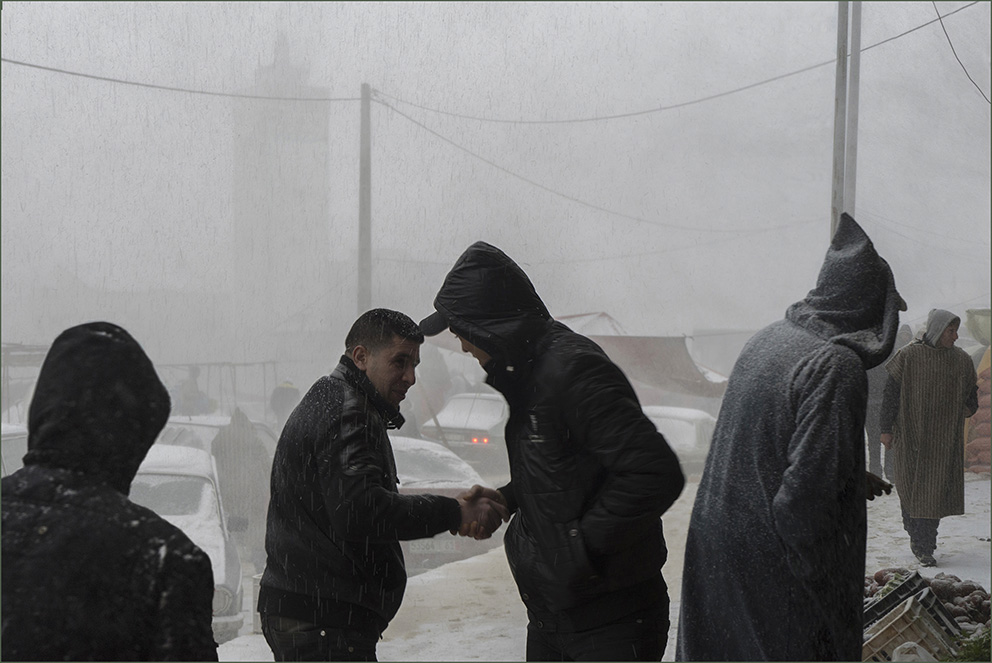 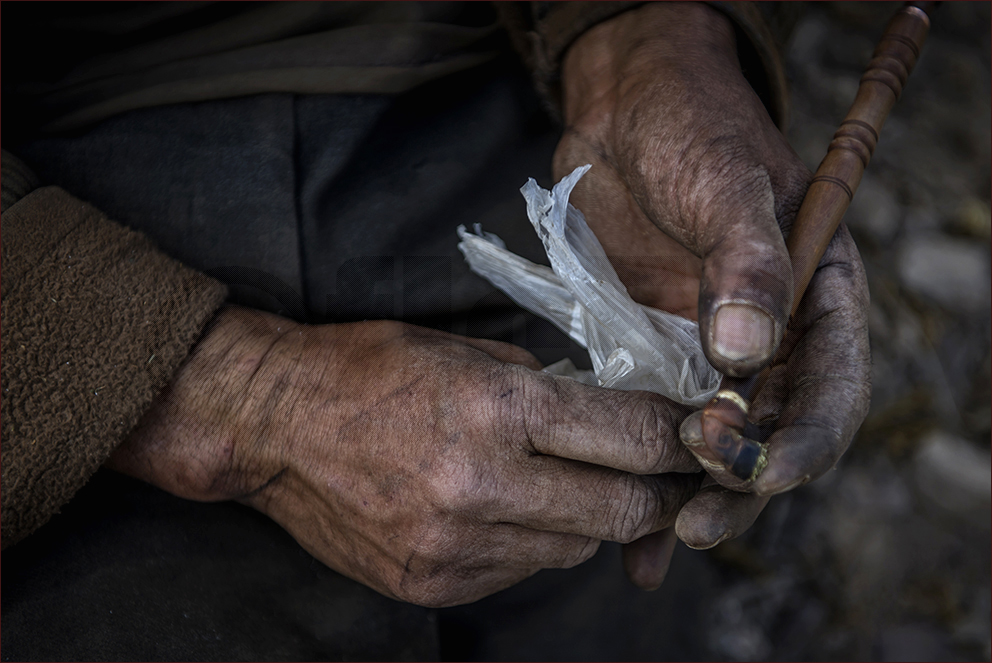 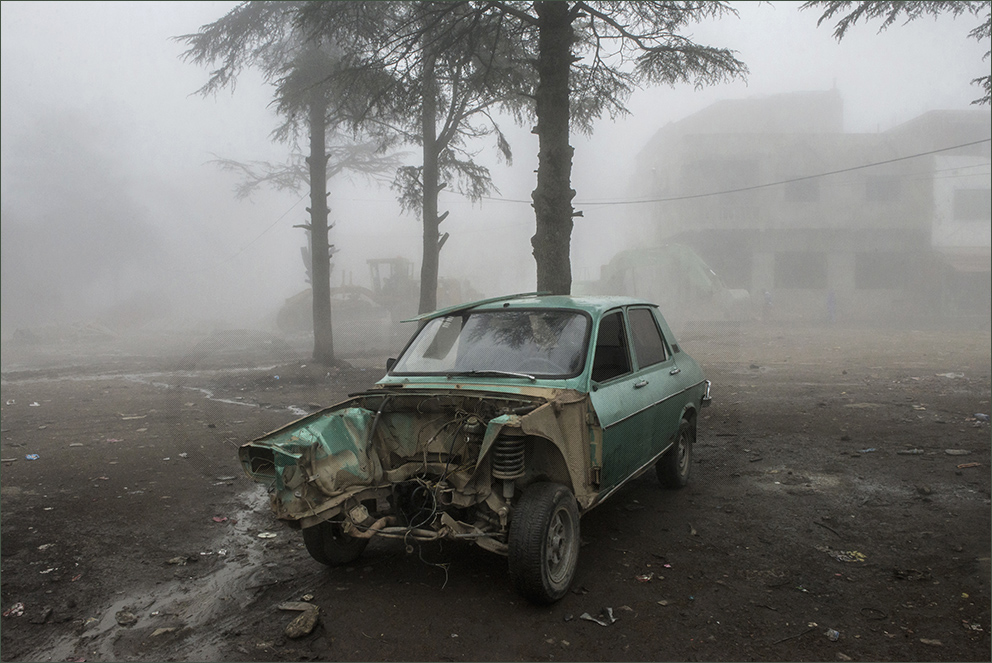 Kebdani’s house is a stone building of three stores, opulent compared with its neighbouring brick-box architecture. It certainly looks like the village chief’s dwelling. Prior to its construction five decades ago, the sieving of the cannabis flowers, or hashish making, already an ancient practice in some parts of Asia, was still an unknown affair in the Magreb. Local farmers had been since long ago cultivating psychoactive cannabis half-hidden in the forests, but only for the production of kif, a minced mix of marijuana flowers and tobacco leaf that had to be furtively moved all over the country to provide pipe smokers. Incomes then were meagre and conditions extremely harsh. Jamal Kebdani recalls his childhood as an “endless calvary”, “working like a beast from dawn to dusk, with no education to even read the Koran”.

But when the hashish craft was finally introduced in the sixties, wide-spread illiteracy did not seem to be a handicap for young highlanders hungry of prosperity. At least not initially, when prospects looked so brilliant. The profits versus the kif trade were fabulous, and the need of much more agricultural land (a huge amount of plant was needed to extract a reasonable amount of resin) seemed a viable affair in an orography consisting of vast and docile slopes oriented to the sun course. On the other hand, nobody around was probably too concerned about the political risk of devoting a whole county, literally speaking, to such a sensible crop. Not in the Rifean culture, historically used to defend its own interests tooth and nail if necessary. With the porous Mediterranean border in the hand of smugglers, the brand-new Moroccan hashish soon overcame its Asian competitors in the European market due to a better accessibility and the fair quality provided by the potent psychoactive power of the indigenous seed. 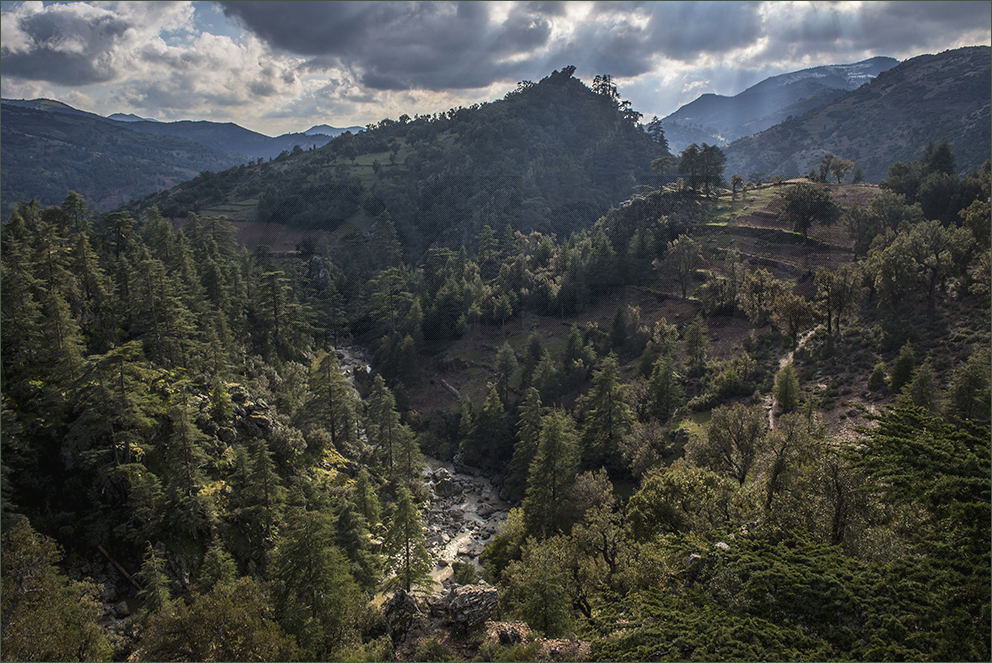 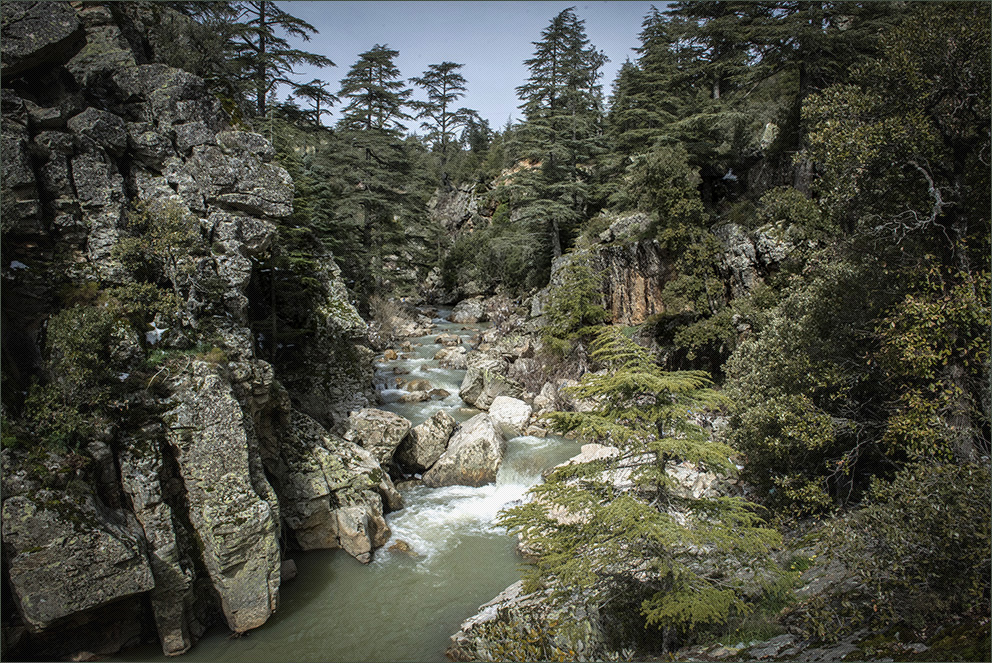 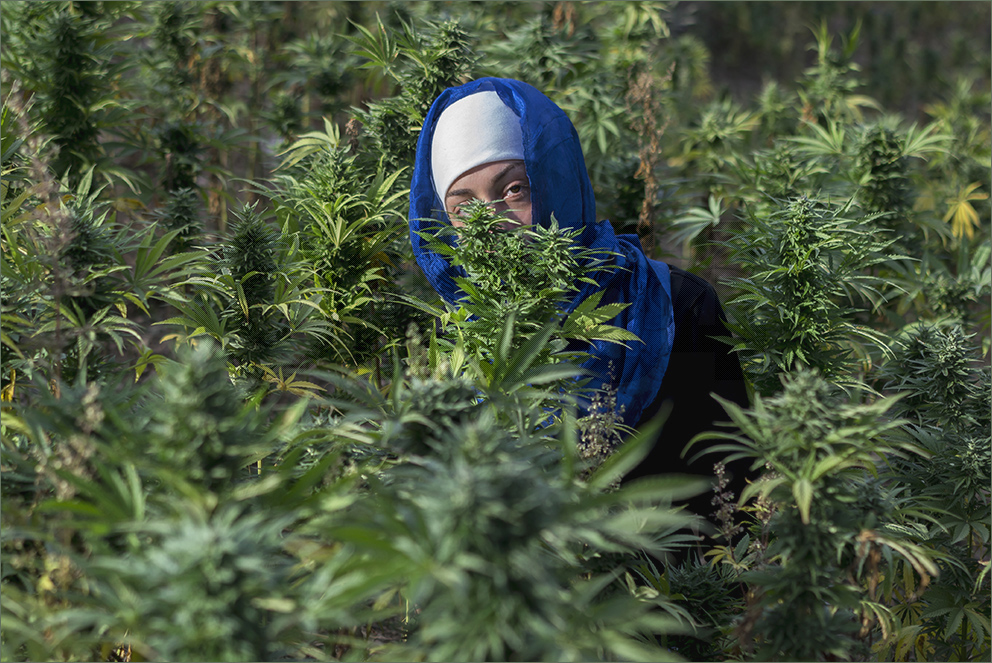 Moreover, the word Ketama was rapidly adopted by the European bohemia as a reachable utopia: a wonderful land with a truly libertarian flavour and just a stone’s throw away. As visitors kept pouring in, the concept hemp-tourism became a long awaited mana for this land of scarcity. It was at this point when Jamal Kebdani built his nice house. The building was conceived as one suitable enough for the village’s principal family and for its “distinguished guests”, which included a spacious garage where up to four vehicles could be simultaneously manipulated by double bottom specialists.

Things, though, soon took the wrong turn. As demand was steadily growing North of the Mediterranean, the race to increase production gained momentum. Hilltops and sunny slopes suffered systematic deforestation and water resources acute damage by fierce pumping and soil erosion. With fields to the very exhaustion, new foreign seeds were introduced, in order to increase the modest output of the native hemp. As resin weight dramatically increased, psychoactive quality plummeted. The thriving enterprise soon shifted into what it is basically nowadays: a multimillion scam based on blending bad resin with henna, condensed milk, wax, glass fibre, amphetamine powder, equine dung or any of the many substances routinely used as adulterant. Needless to say, with organised crime gradually in command and all sorts of crooks roaming around, the bohemian tourism of old just vanished.

After all the fuss, the young backpacker looks composed again, surrendered to Jamal Kebdani’s hospitality. During his stay, he has been helping in the fields, trekking dreamy mountain trails and ancient cedar forests, or socialising with Issaguen’s crème de la crème, to finally realise that nothing like a surfer-type youngster to nonchalantly handle hash-stuffed boards across the border. His busy days normally conclude at home, sipping tea with the family, enjoying the fact that the legendary drug lord he happened to casually hear about down at the coast, is in fact a seasoned Muslim man with a comforting favorite proverb: “a guest in the house, God in the house”. 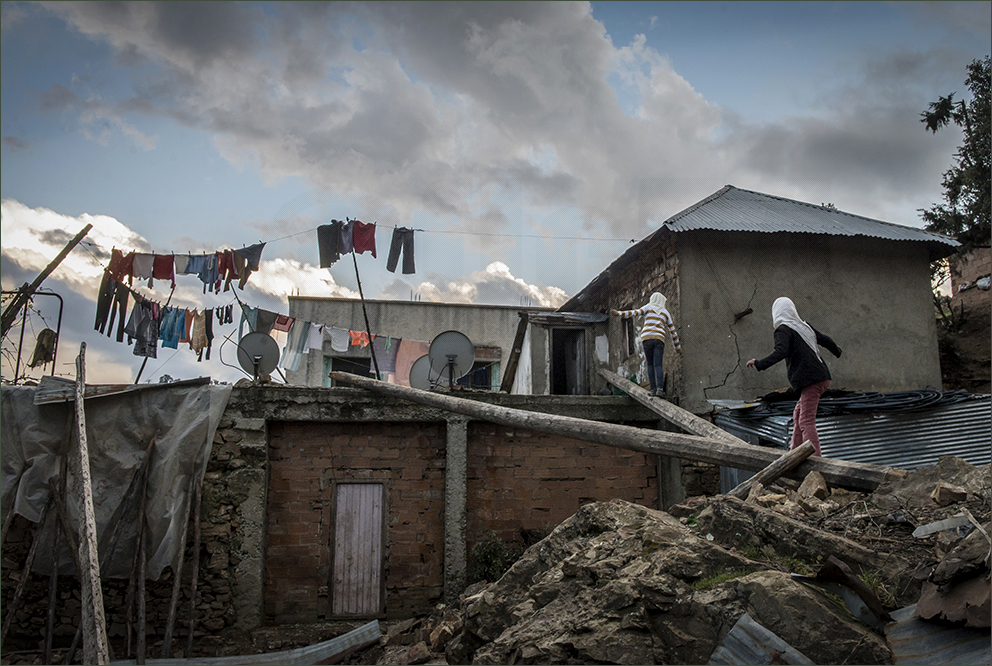 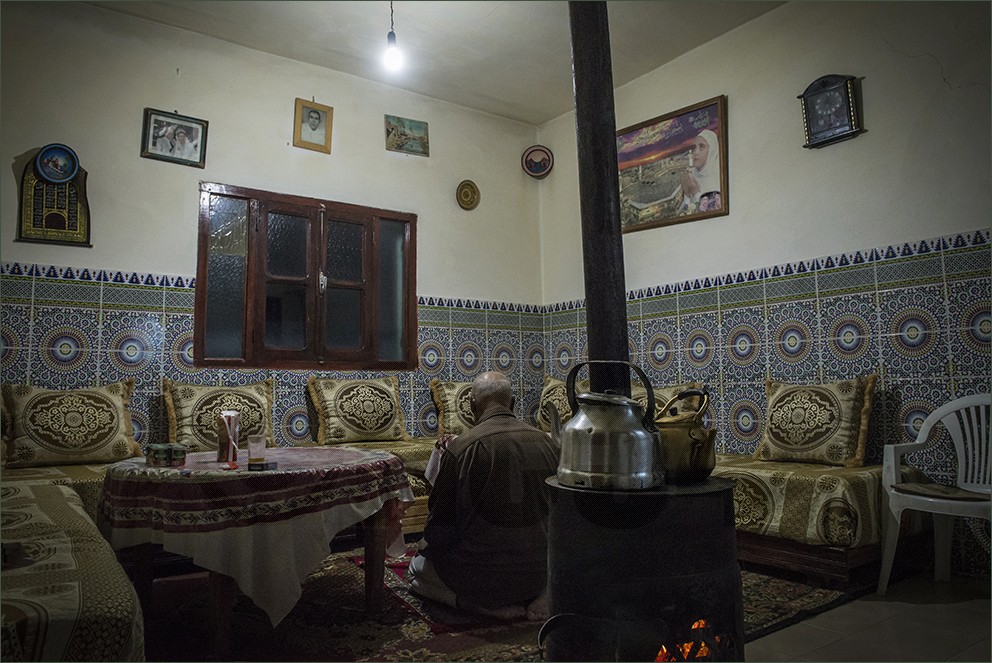 The living room appears massively decorated with framed pictures: Arab calligraphy, ancestry and amateur paintings with mystic flair, left by former guests. Near the ceiling, a large nocturnal photograph depicts a cocky middle aged man in brown suit and sun glasses outside a motel: younger Kebdani himself, over three decades back. While the image seems to transport the patriarch to the “good old times”, his wife Amina rues that period as the “darkest” of her life. As she recalls, her husband’s lust for more land lead to a bitter feud with extended family, young blood educated in Europe with big intercontinental plans and strong presence within the corrupt local system. Kebdani was charged with abuse and the judge did not waver: five years behind bars. According to tradition, his absence had to be filled not by his wife or children but by his younger brothers, petty farmers allegedly living until then on family scraps. Their idea of business was to sow the property with foreign seed and offer the poor output as tiptop hashish. Swindle after swindle, the faithful European clientele amassed along the years turned bitter and vengeful. From being an eminent public figure, Kebdani came out of jail as a penniless pariah with a price to his head. 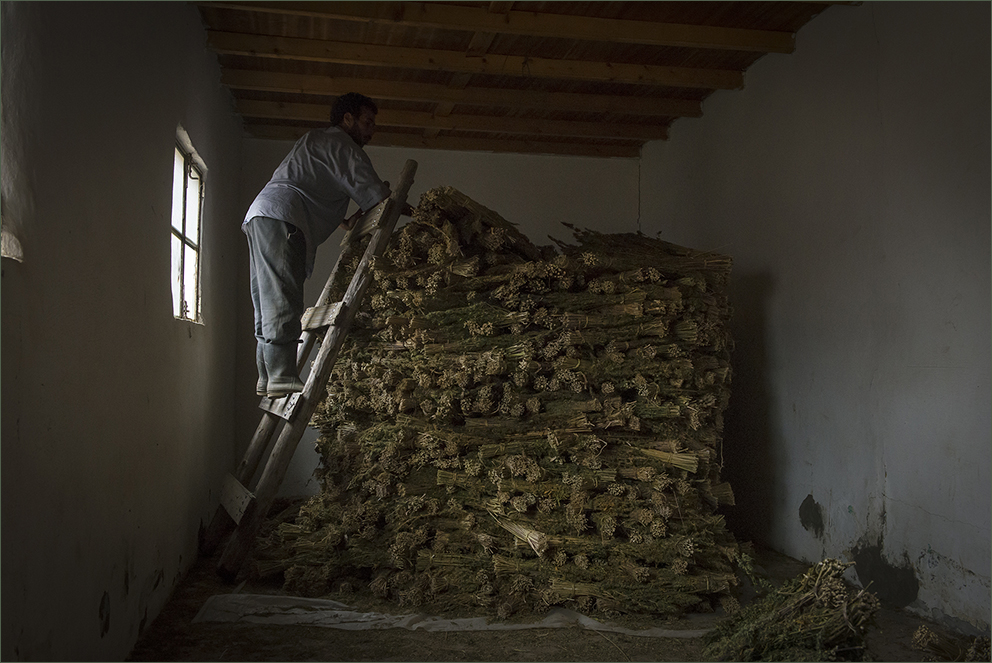 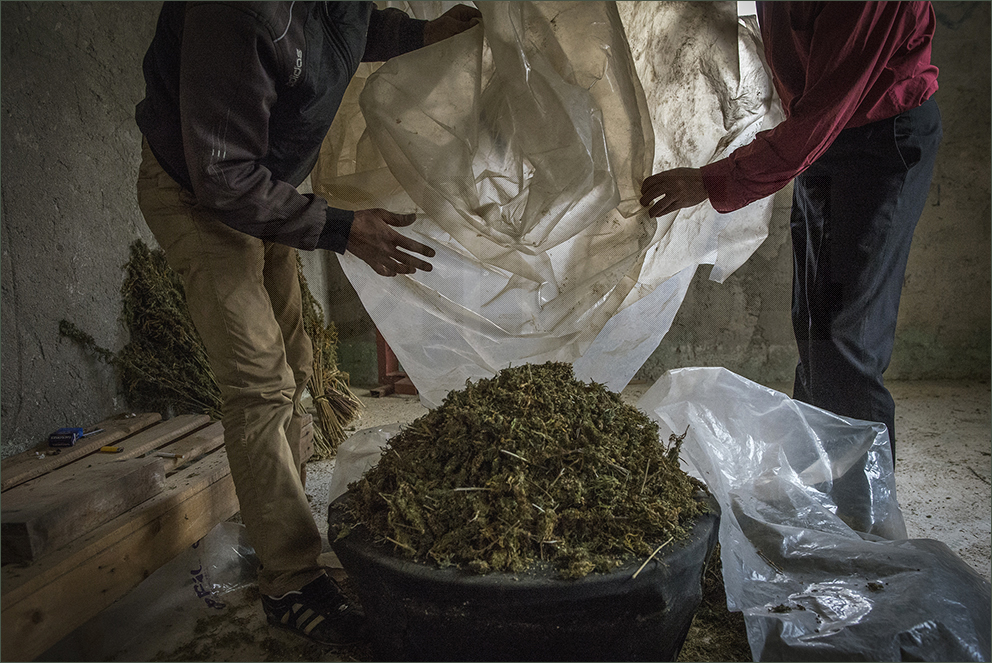 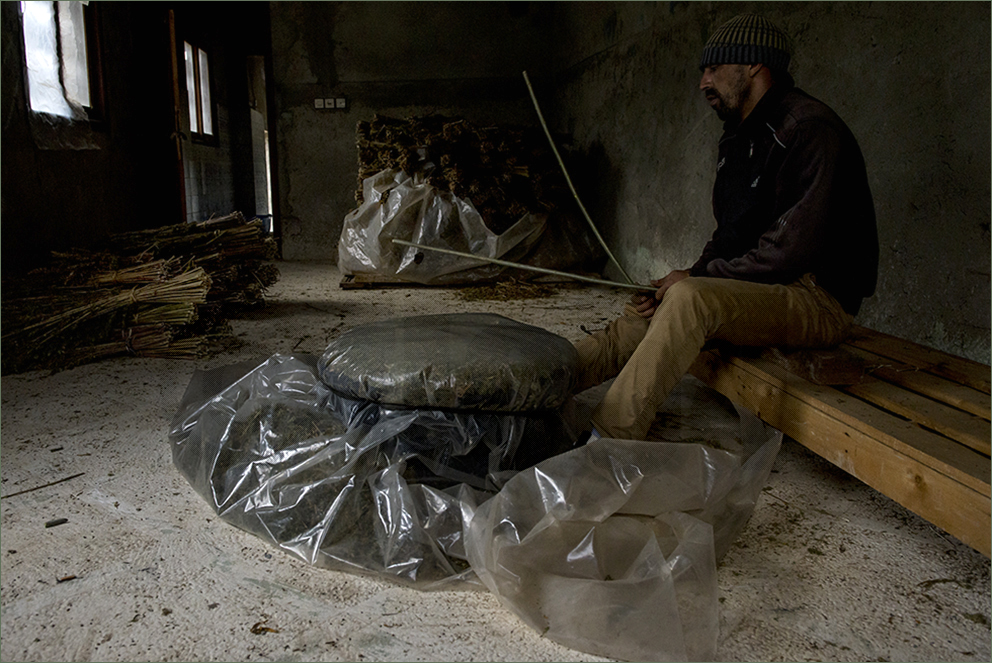 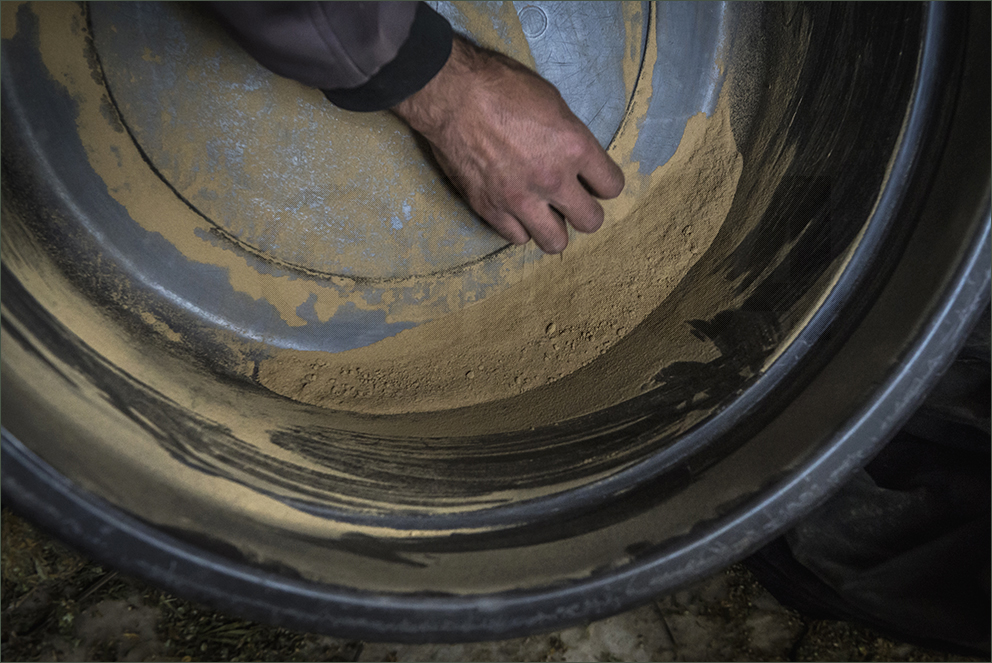 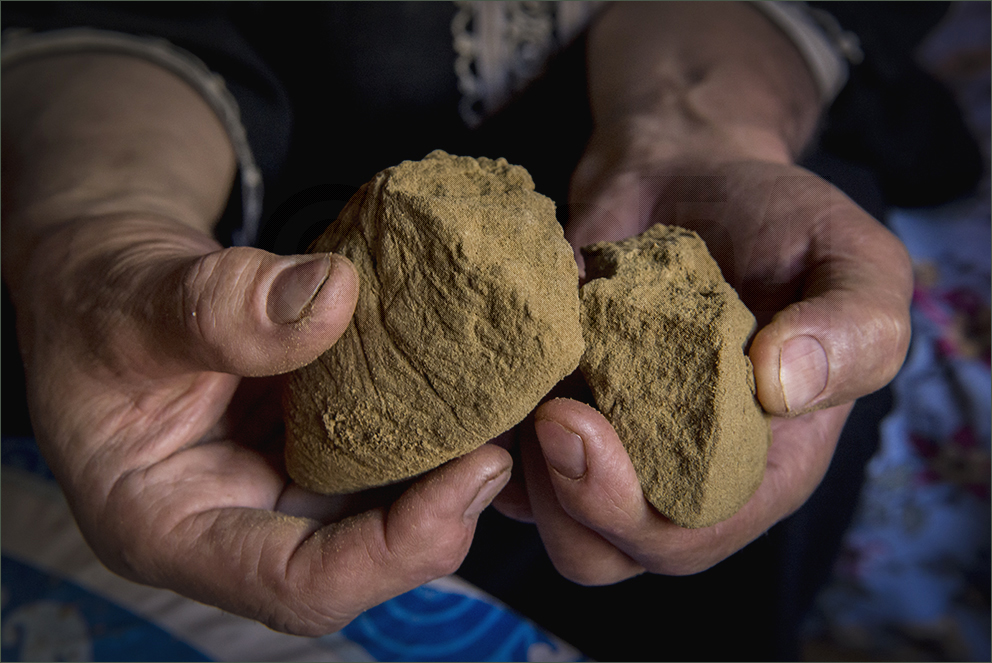 But long years of despair have not broken the veteran farmer’s faith in the old native seed, “the queen of the mountain” as he puts it, or “the genuine mother of our Ketama premium brand”. Now, with the winds of cannabis regularisation blowing strong north of the Mediterranean, he feels back on track: “nobody like Europeans”, he says, “to appreciate a true luxury good ”. Over one month after the harvest, the hemp is ready to be transformed in hashish. Kebadani fixes a piece of sieving fabric on a basin, places a copious heap of dried plant on top and covers it with a plastic sheet, also fixed to the edge of the basin. Then, he starts to rhythmically beat the plastic surface with two thin hazel sticks. Minutes later, the sieve is removed, revealing a layer of fine golden sand on the basin bottom. The old man dips his finger tips in the powder and places it under his nose, visibly delighted by the spicy scent. “Sad”, he says, “that such a wonderful healer had to be reduced to a criminal threat”. From the young traveller’s perspective, things seem clearer now. He does not even blink when his Muslim host asks him to “smuggle” from Europe a “good Scotch” next time he comes around. “For my first-aid kit, of course”, Kebdani says, solemnly placing a hand over his battered Berber heart.  ©flc54