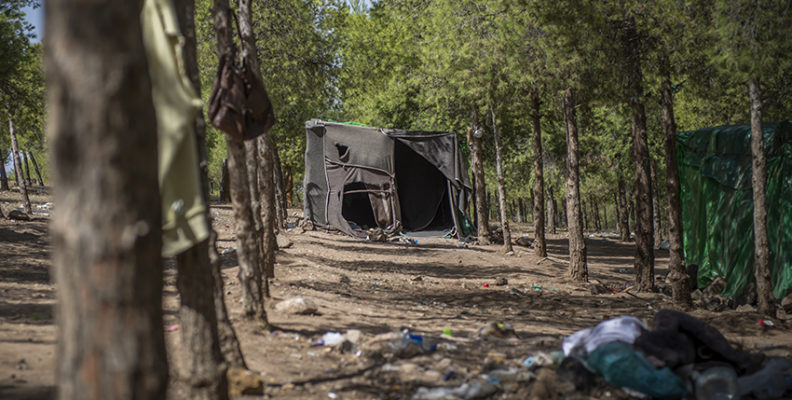 Oujda, north-eastern Morocco. A young Nigerian beggar approaches me in the old part of town and we sit together in front of a copious lamb couscous. He is hungry. We eat in silence, under the watchful gaze of a dinning room that lives on the surrounding souk activity. Already with the tea, I ask for his situation and he discretely tells me two things. One, he is desperate to get a small inflatable boat with paddles. Two, if I want to know, when leaving the restaurant I should follow him at a safe distance. His steps guide me across the labyrinthine backstreets outside the ancient walls, to a bus stop where I see him embracing a woman of about his own age carrying a sleeping toddle on her back. Next, they board a packed bus that I narrowly manage to take. 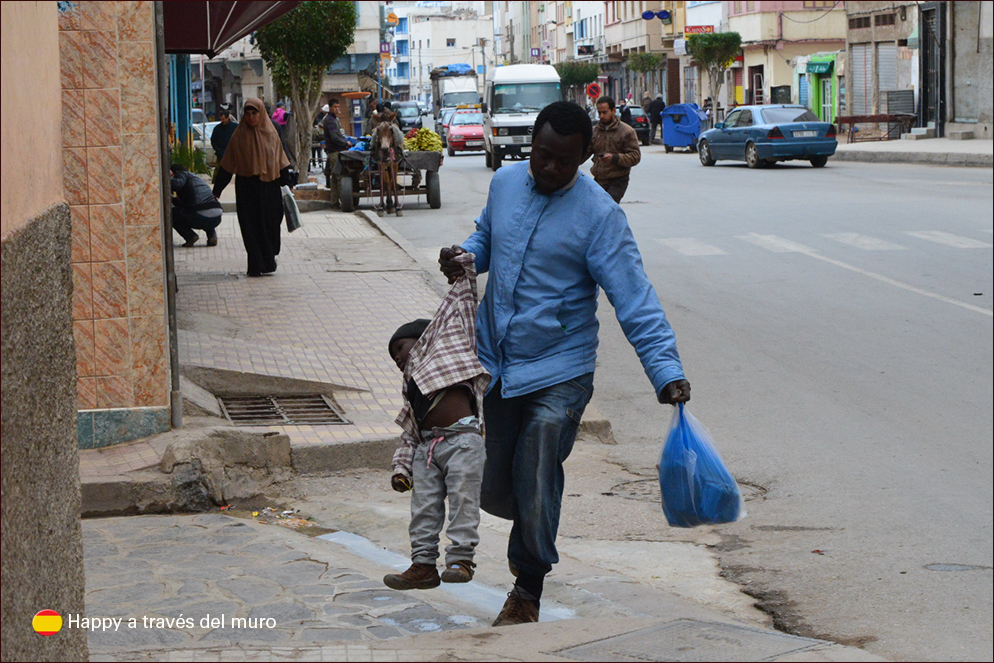 We are the last ones to go out at a remote stop beyond bus shelters or even streets. A sandy path takes us to a nearby pine forest immersed in fog. The scene is riddled with plastic rubbish scattered by the wind and bones from large animals half-buried in the ground. At times, human presence is perceived among the tree trunks, elusive figures that seem to vanish with the next blink. An agonising donkey with a broken leg stares at us with a disturbing expression of calm. Suddenly, as if by magic, the gloomy forest becomes a no less grim shanty settlement ensembled with pine branches, ONG plastic sheets and woolen blankets as insulating material. The young man drops his family at home and pulls me to be introduced, he says, “to the authority”.

“I was already living in Europe for some years, but problems with the law put me on a plane back to West-Africa. Now I feel too old to try again. My mission here is to help this youngsters to make their dreams true”. The monologue by the community’s strongman is constantly disrupted by kids playing around, all of them under the care of his wife, a young girl of about half his age. A naughty little boy happens to be their own son. The rest spend the day awaiting the return of the mothers from the daily begging in town. Although the surroundings seem ideal for kindergarten life, children are no allowed to even sit on the ground, riddled with an infinite swarm of tiny insects that seem to feed on human skin. From time to time, some young residents come in the hut, place some money on the chief’s table and take away a meagre cannabis dose.

Commotion outside breaks the relaxing twilight mood. The shanty boss stands up and urges me to follow the man who brought me to the forest to his dwelling. As I retreat among the trees, I see a group of women with travel bags approaching the camp along the forest path. Two men close the group, as if driving a flock. The men and the local leader hug each other. My intention of photographing the scene gets frustrated after two or three shots with a persuasive push that throws me inside the cavernous shack: “better if they don’t see you around here”. 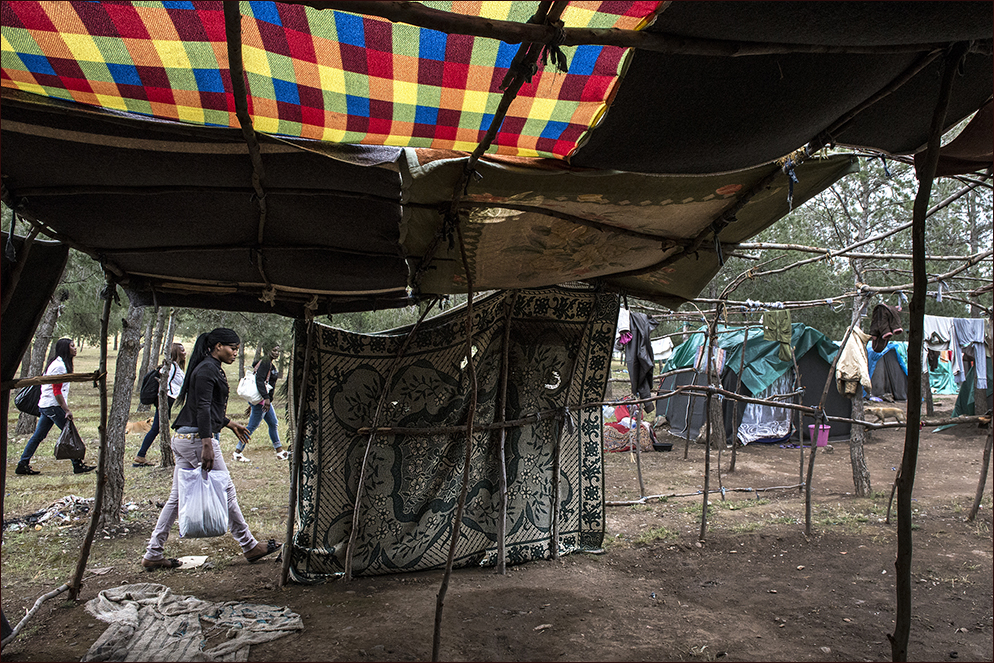 The first hours of the night go by among whispers. With the toddle already sleeping, the mother talks about her heart-breaking odyssey across the Sahara desert, “two long months of unspeakable misery”, and how the initial relief when reaching “Europe-looking Morocco” soon became a nightmare: “I found myself alone and vulnerable in front of the sea, trapped between hell and an impenetrable wall “. Although she thanks heaven for having found “a strong, loving man to trust”, her journey has been so far “a permanent distress”, much more so, she adds, since having give birth. And no wonder, given the family prospects. Mother and son will soon join a dangerous sea crossing to the Spanish coast, a fare too costly to be afforded by the three of them. As an alternative, the man plans to travel to Beninzar, about 250km. to the east, and try to sneak in neighbouring Melilla, the heavily fenced EU territory on African soil, by rowing around the bay pier on the inflatable boat.

The sudden drumming of winter rain on the plastic roof invites the idea of staying overnight. In fact, the place looks roomy enough, with a space between the kitchen area and the entrance, well separated from the sleeping room, where a good blanket would make a god bed, at least for just one night. These hours of deep calm happen to be critical since a new raid by the Moroccan police is expected every dawn, gruesome orgies of beatings and arbitrary arrests that skip women and push men to run like rabbits looking for a hideout. In better times, a Sub-Saharan migrant passing through Oujda could find shelter in the university campus, but such a humanitarian project soon became a stronghold for organised crime and the less daring started to settle beyond the city’s outskirts. The proliferation of human trade as the main motor of this migratory flow ended up giving gangsters the control of the forest settlements too, convenient halts where keeping the merchandise while finding a final destination for it. 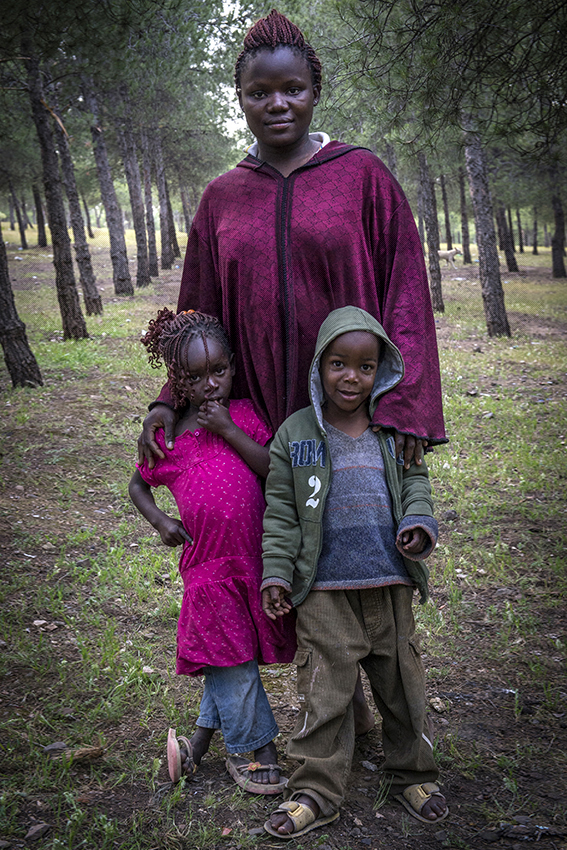 Next day, the camp boils with activity. Some of the new girls walk away carrying empty plastic containers to the closer drinking fountain, about 2km. away. The younger ones remain in the camp, busy among colourful wigs and bizarre outfits, working on the preparation of a party late in the evening under the attentive monitoring by a middle-aged woman with matriarchal air. The party happens to be a subsequent event after every new arrival from the border in order to introduce newcomers in local society. The chilly environment oozes teenage enthusiasm. No one would say that this young women have just been transported across the Sahara like cattle.

As the morning progresses, some male residents come back from their daily scuffle with the immigration security. To be caught is no joke since it often ends with some broken bone or, at least, with being dropped at the no-man’s land between borders, a treacherous territory controlled by smugglers and thiefs from where more than one has had to walk shoeless the 15km. back to the camp. Despite having spent the last hours chased like an animal, the man in charge behaves like a commander. Seeing him acting suggests how subsistence -if not pure survival- and dominance on women go hand by hand in this underground equation. 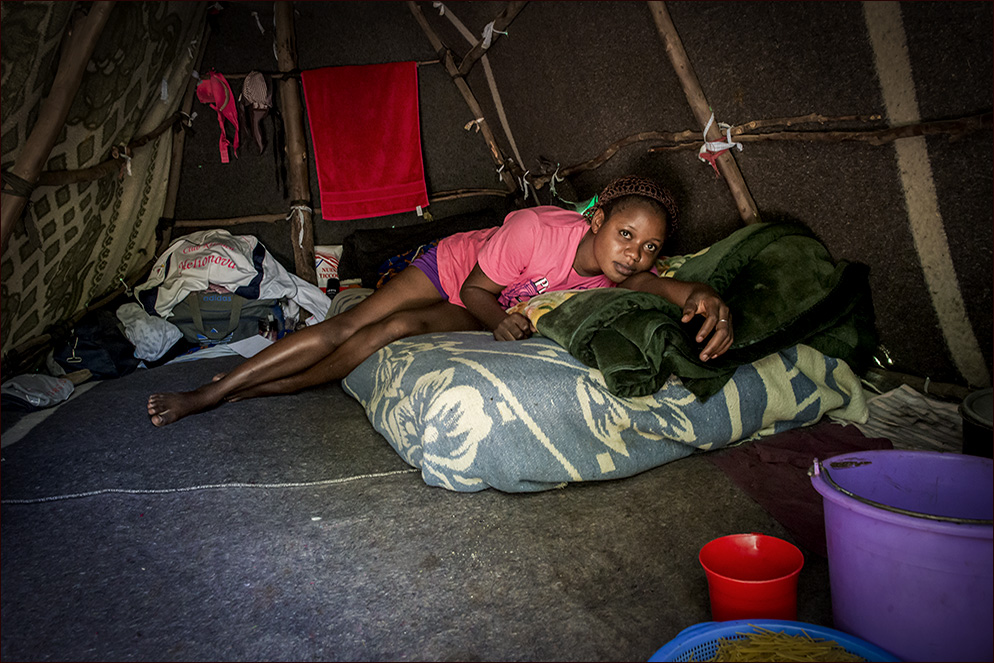 The parents and the toddle are gone. Instead, a young woman is squatting the shack now, lying on the rickety bed, surrounded by rundown travel stuff embroiled with abundant pink colour and fashionable logos. Her pretty face shows evidence of having been abused, starting with her deeply sad eyes. As she says, her firm intention of going back home to Benin is truncated by her debt from the dessert crossing. With no money or idea of how how to pay, her only getaway seems to be prostitution in Morocco, something she blankly refuses to. “I’d never imagined”, she says with a wince, “what our own men are able to do with us”. 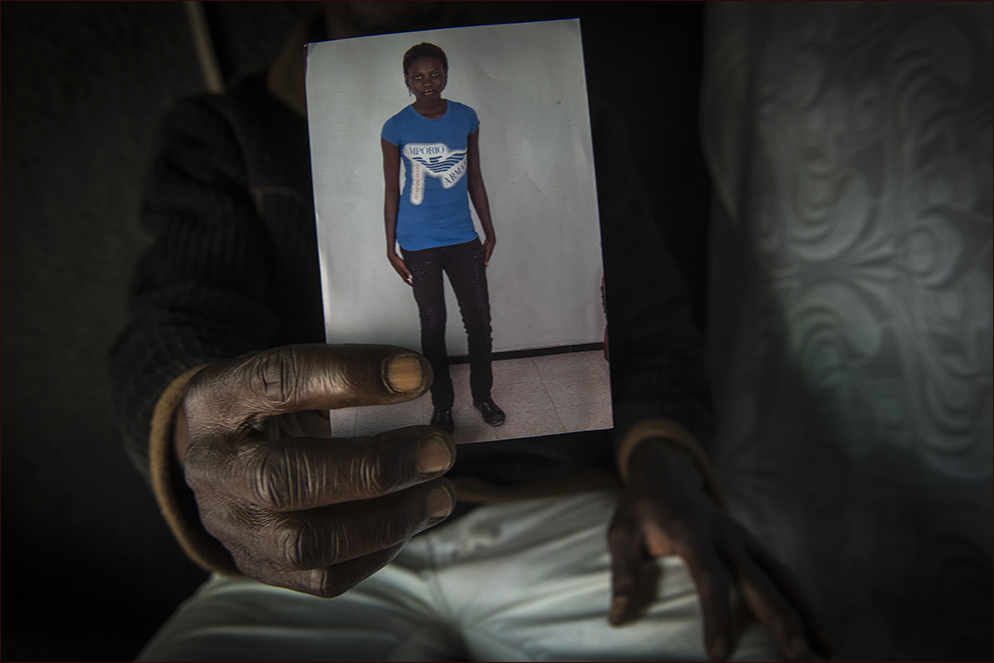 About leaving the camp, its strongman calls me apart and shows me a colour photography. Another young woman, perhaps in her teens: “her name is Happy. I need a favour”. Happy’s story emanates tragedy but also a faint glimmer of hope. Passenger, as I hear, at a wreck occurred few days before in high sea with scores reported missing, the favour consists in finding out if she is among the few survivors. At Salvamento Marino in Motril, the Spanish organisation coordinating the rescue, some corpses from the disaster await burial, but none of them fits Happy’s characteristics. According to the official report, three women survived and only one of them could be her, a pregnant teenager who, as the somehow reticent Guardia Civil agent says, “probably enjoys a new life at some unknown location”. ©flc54

*Most of the images illustrating this story were obtained before 2016.