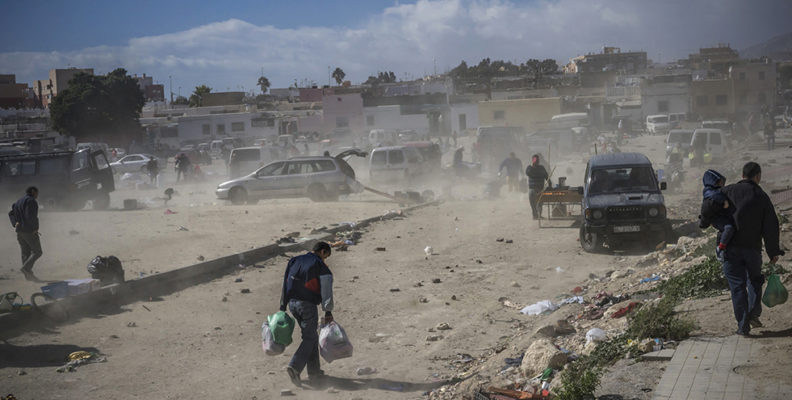 At the bottom of a moonless summer night, a stealthy little crowd walks to the humble Al-Ishan mosque, set on the ground floor of a housing project, to welcome a new Ramadan day among prayers and hariras.

We are in El Puche, a ramshackle suburb on the outskirts of Almeria, Europe’s most Southern tip, where a North-African community dwells since a couple of decades besieged by unemployment or, at best, hired as cheap labor by the deceiving greenhouse industry. Outside, in less than one hour, the more than foreseeable burning sun will start making life hard for anyone eager to be without food or drink the whole day. It seems logical to think that the mosque congregation would quietly head home and wait indoors until sunset. But not everybody in this sturdy fellowship has such plan in mind. 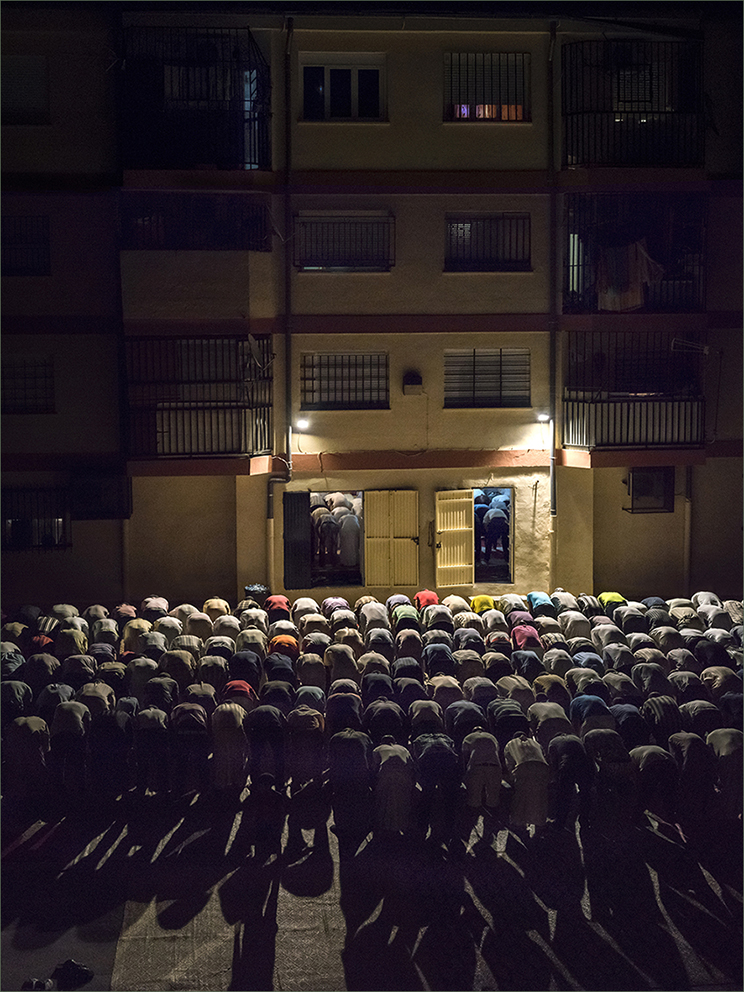 Following the religious act, a young Saharan student called Shafik El Mehdi, a second-generation immigrant, nonchalantly walks a couple of blocks to a large vacant lot, already busy with motor racket and nervous torch light. Incipient dawn gradually dyes a vast ocean of goods set on the dusty ground for sale, barely protected against strong gusts of wind. El Mehdi moves up and down the arid terrain, muffled up in his berber djellaba, greeting every vendor in Arab or Spanish as the case might be. Some answer with indifference, even disdain. Others nod resignedly and handle him some coins.

Although looking like an opportunistic beggar, El Mehdi defines himself with a wink as a “free-lance entrepreneur”. His trade, he gravely adds, is the only “truly democratic resource” in the eurozone: waste. As the bluish burning sphere raises over the horizon, with the first waves of costumers flooding the scene, it seems evident that rubbish is indeed the leading protagonist in this massive event. During the week, a strong army of scavengers have been thoroughly combing the middle-class containers all over town to offer their harvest every Sunday morning for next to nothing. Having said that, waste-entrepreneur El Mehdi is one step ahead from the rest of the market. 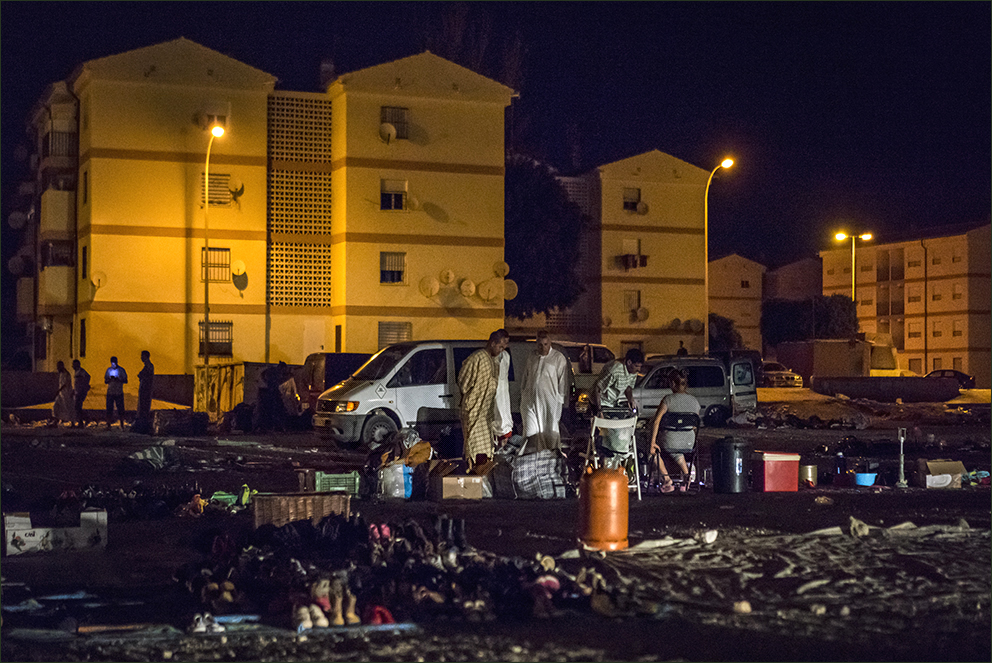 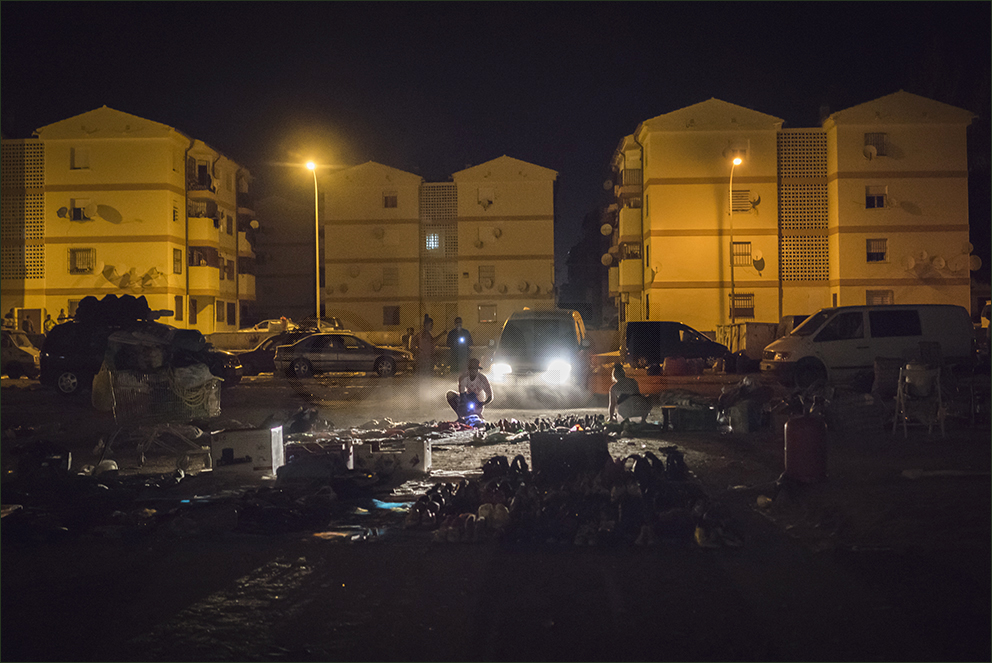 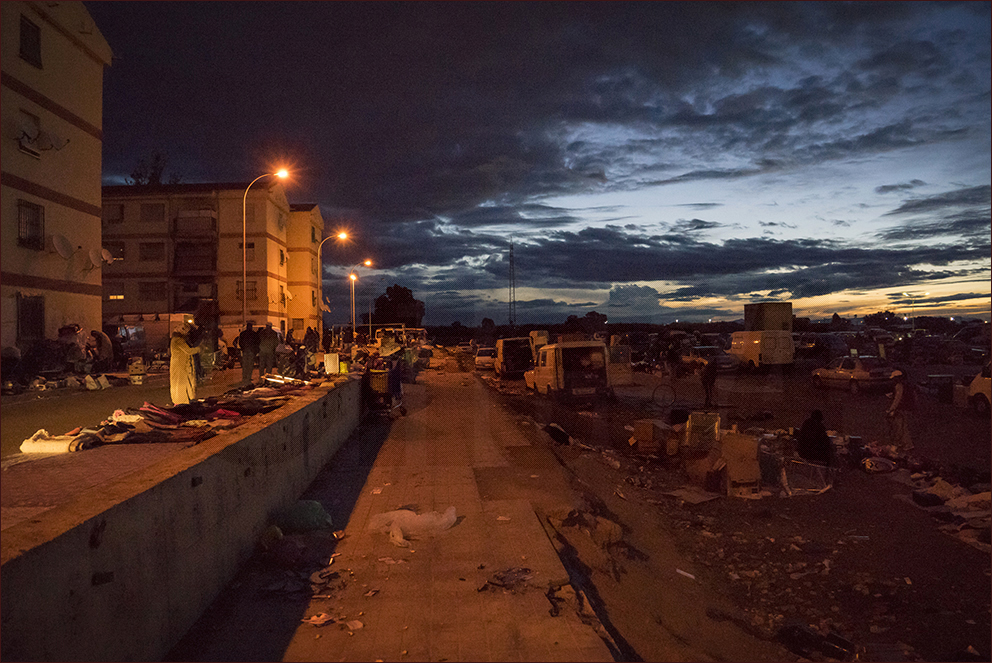 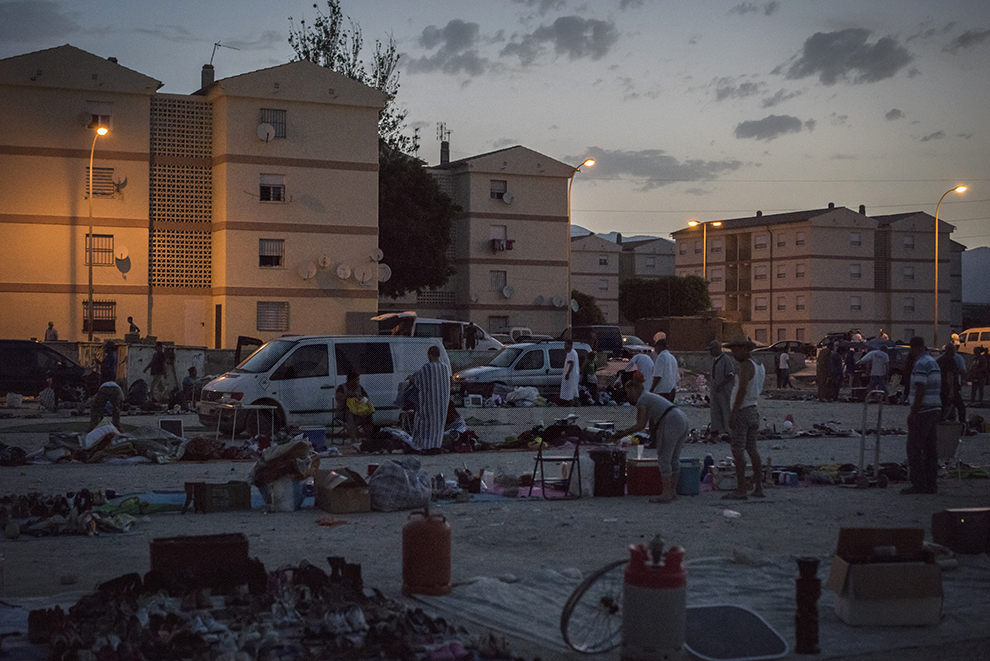 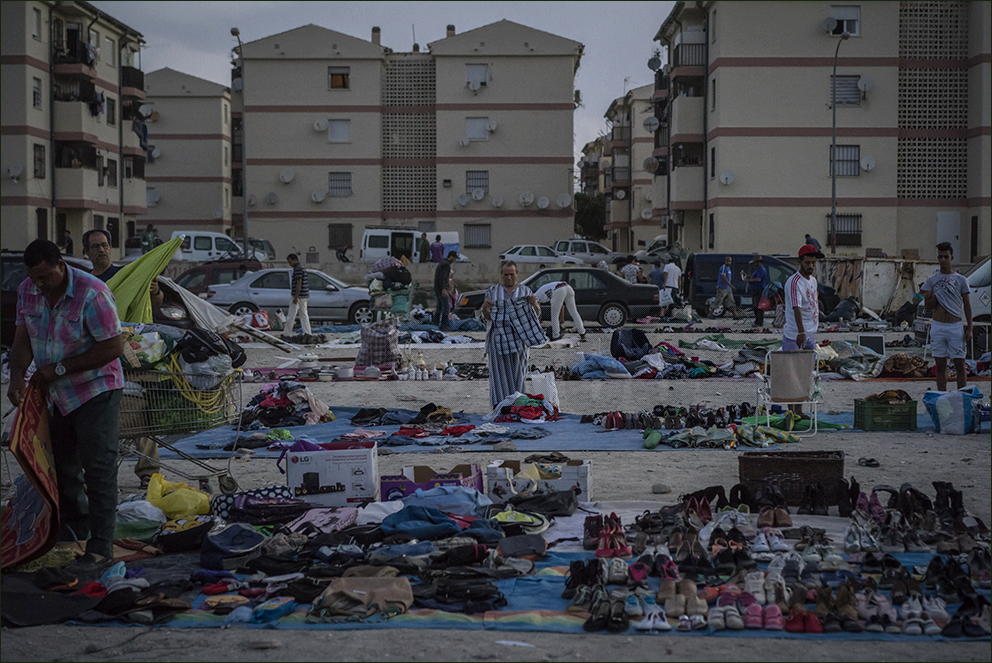 It must be understood that this is a clandestine gathering on which local authorities try to keep a blind eye. Officials estimate that, given the precarious economy of the immigrant population, to intervene against such a vital source of survival could be move prone to raise marginal crime levels, already through the roof. But such a leniency has two sides: while police stays away despite the fact that innocent garbage is not, by any means, the only merchandise in the vacant lot, the municipal cleaning services don’t show up either.

Such scenario gave Shafik El Mehdi a rather reckless idea that put “on the line”, he admits, the market itself and, more critically, the relation with his family and neighbours: he went to the media and told an astonished photojournalist how, at the end of the day, the great garbage souk of El Puche became a forsaken dump at the mercy of the recurrent windy weather, with all sorts of filth blowing around, inundating any nook of daily life. His angry parents, El Mehdi recounts rising eyebrows, threatened with throwing him out of the house. With the front-page story in the news-stands, the young Moroccan allegedly spent one whole day with his forehead on the ground. 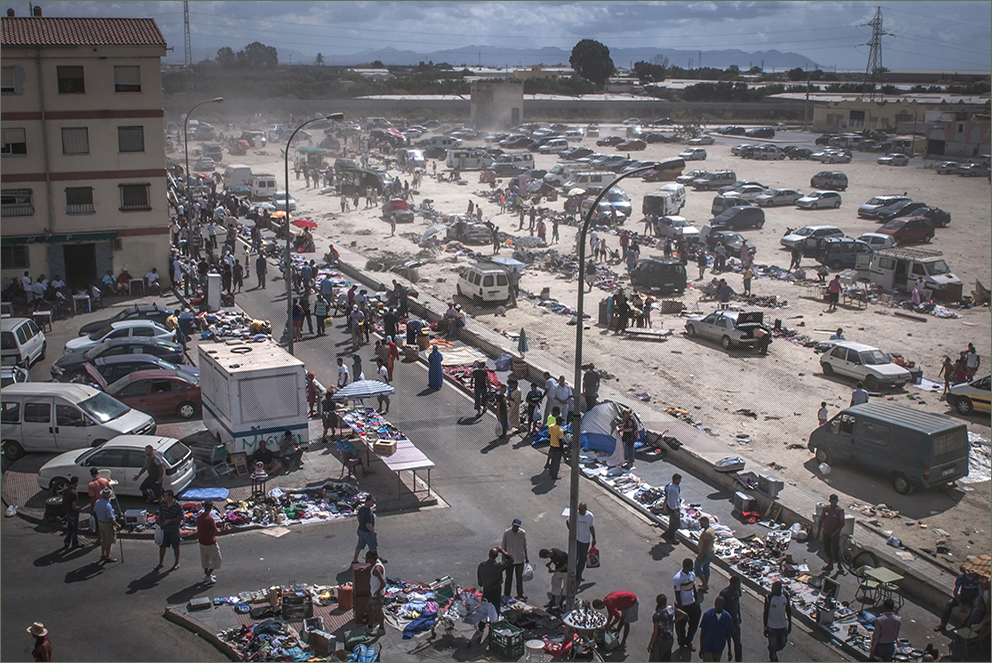 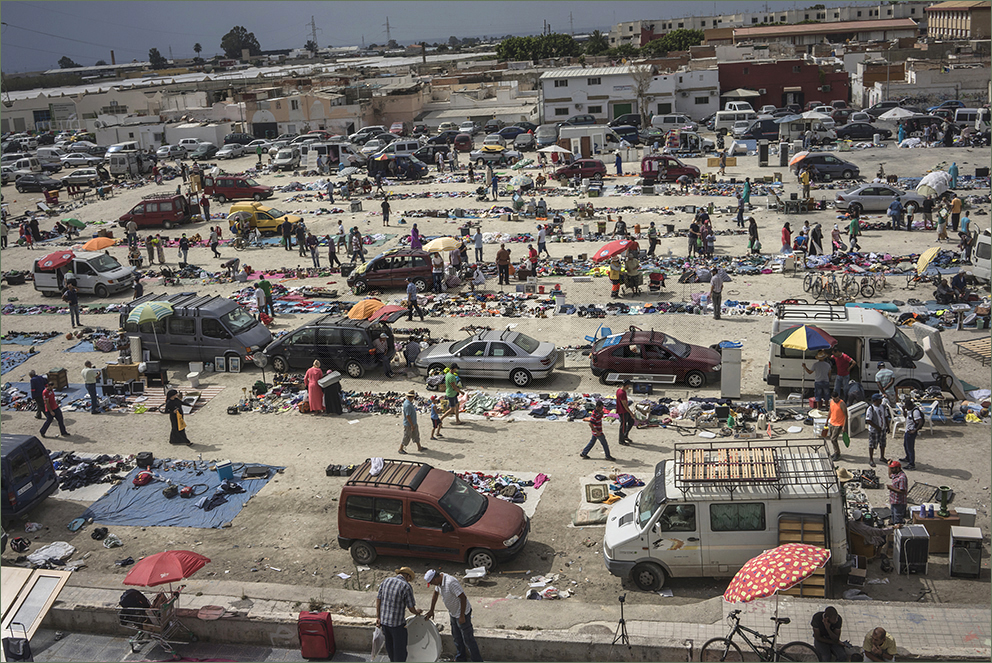 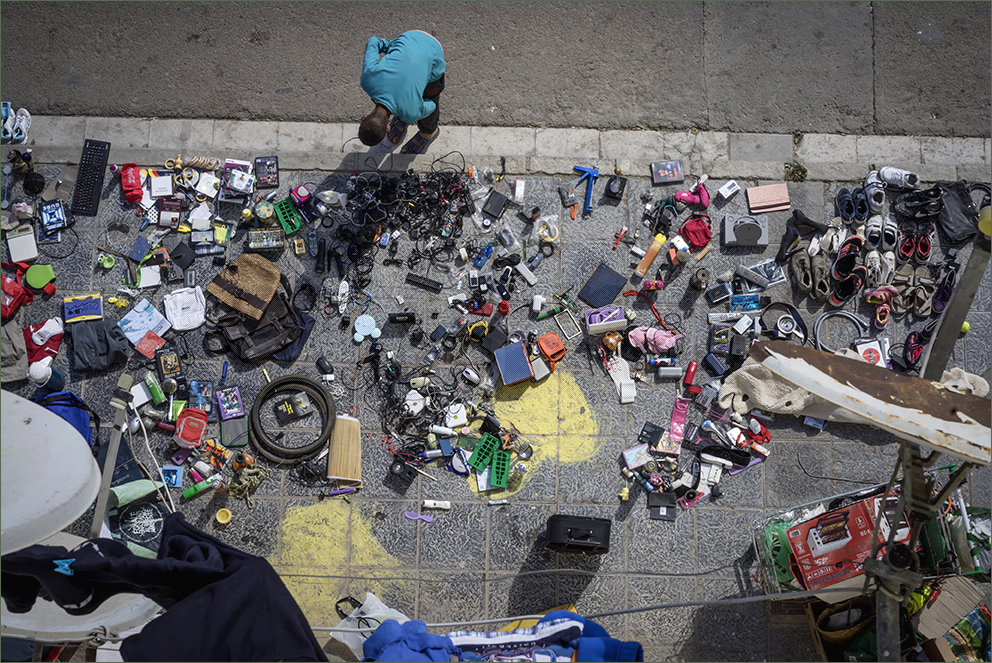 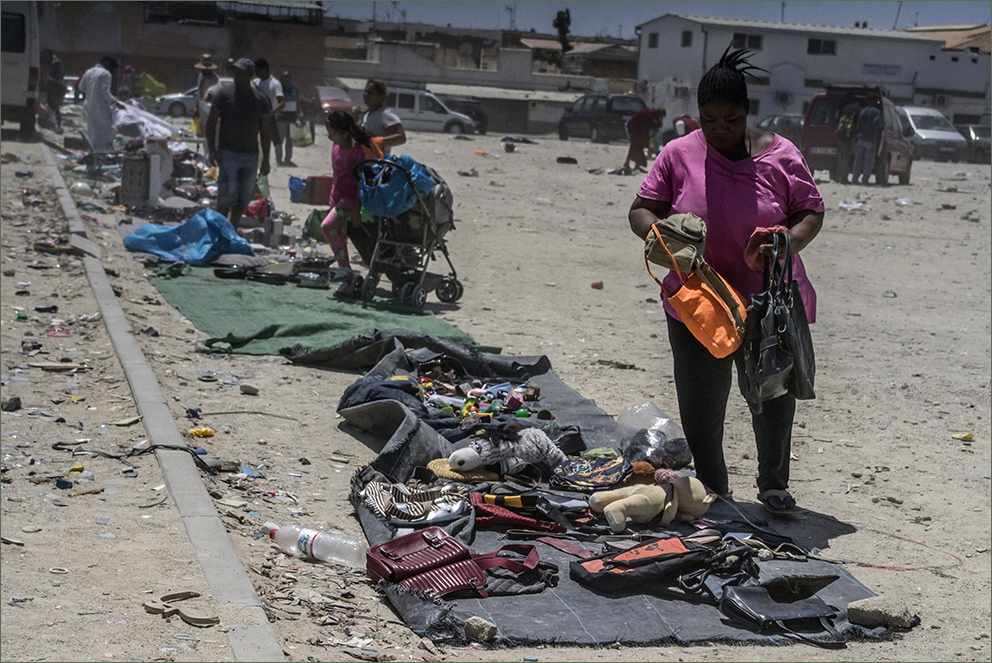 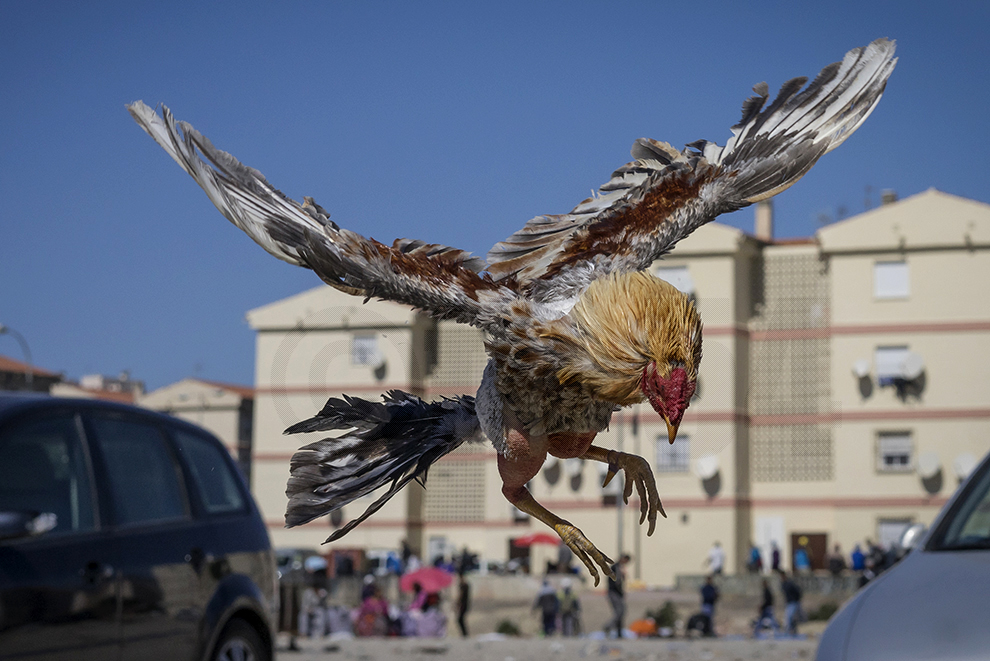 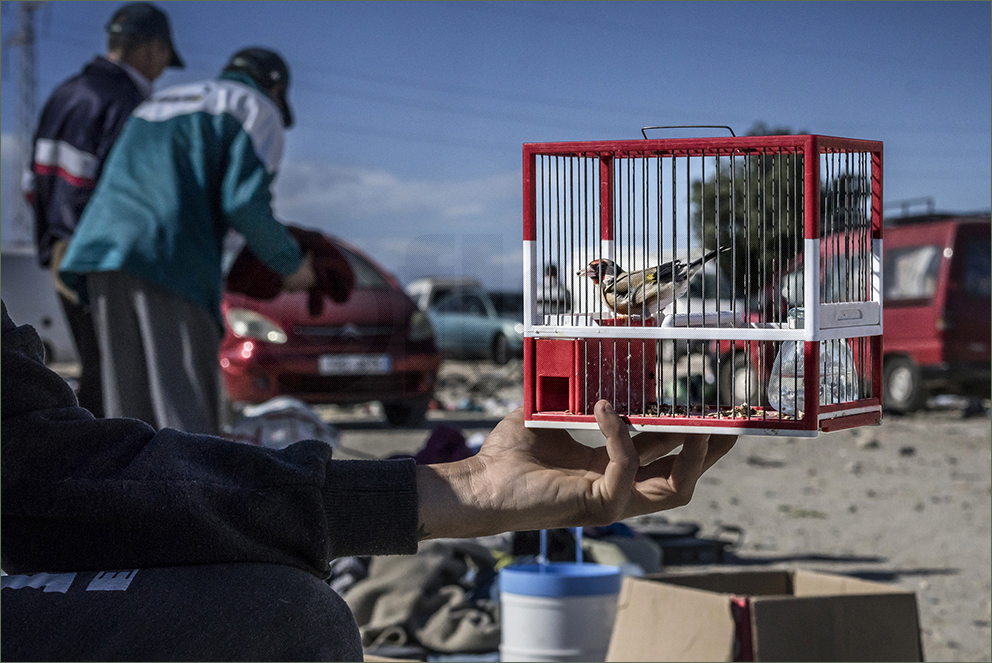 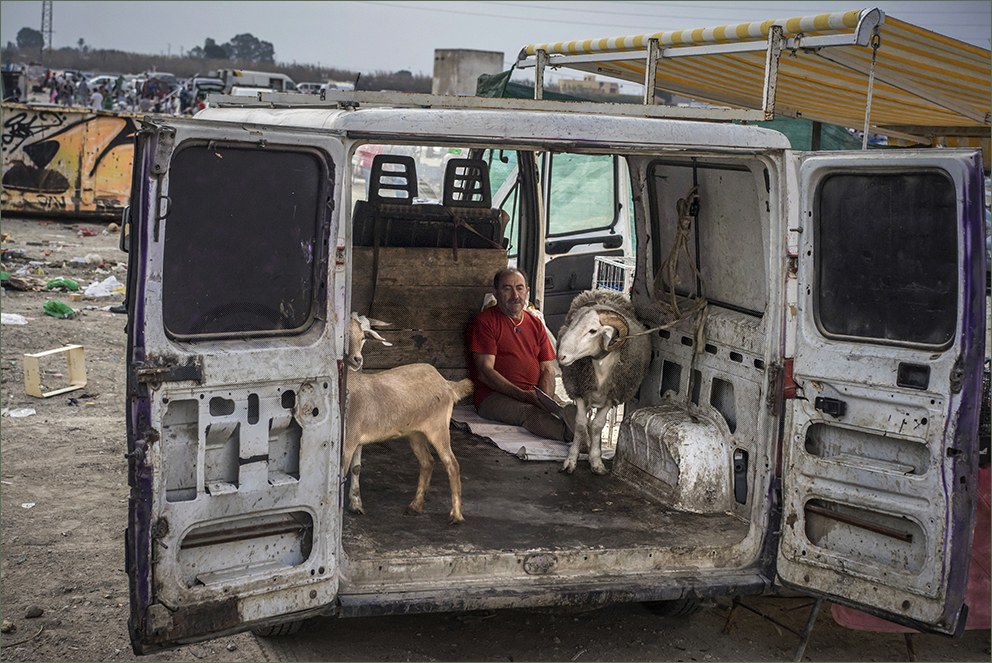 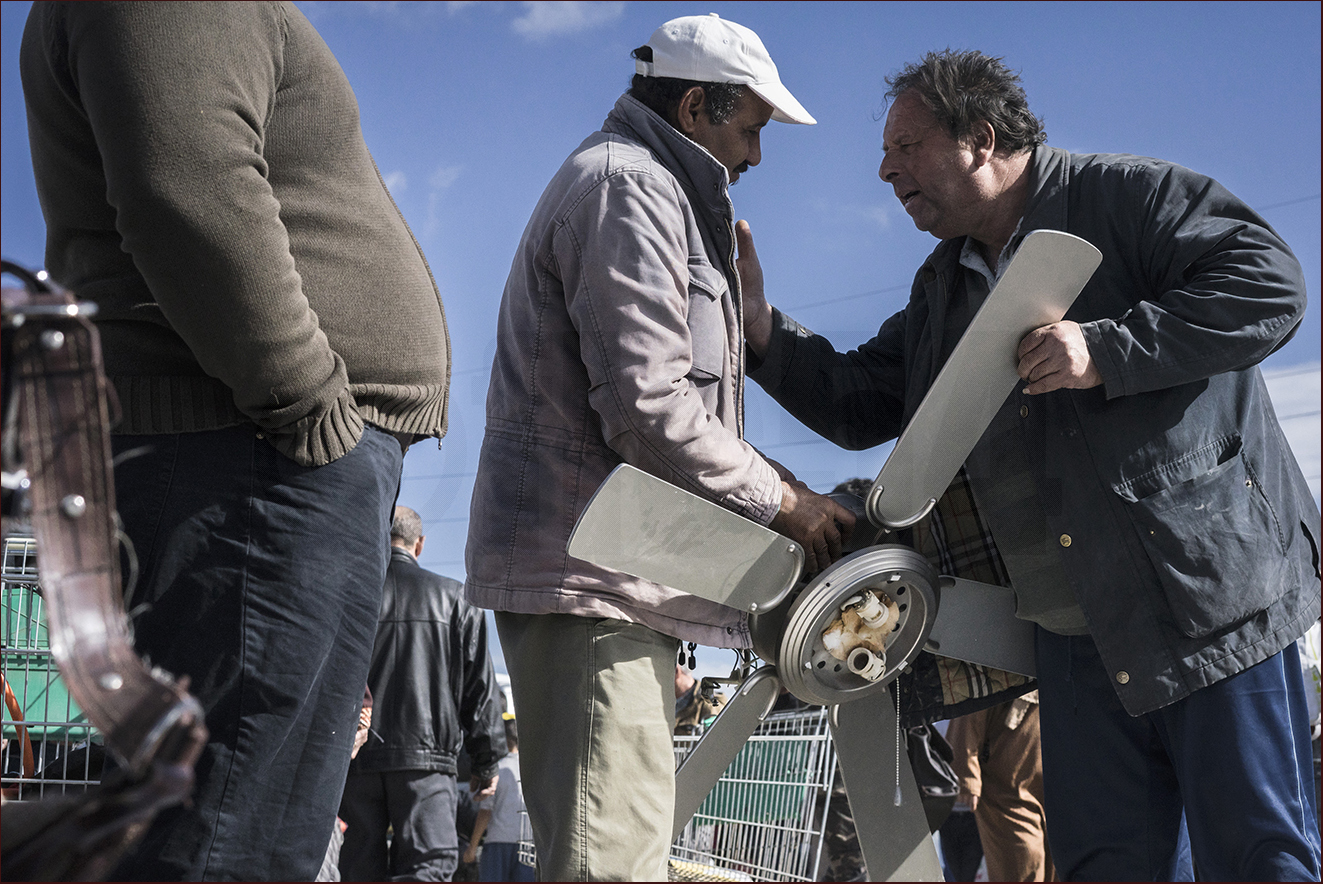 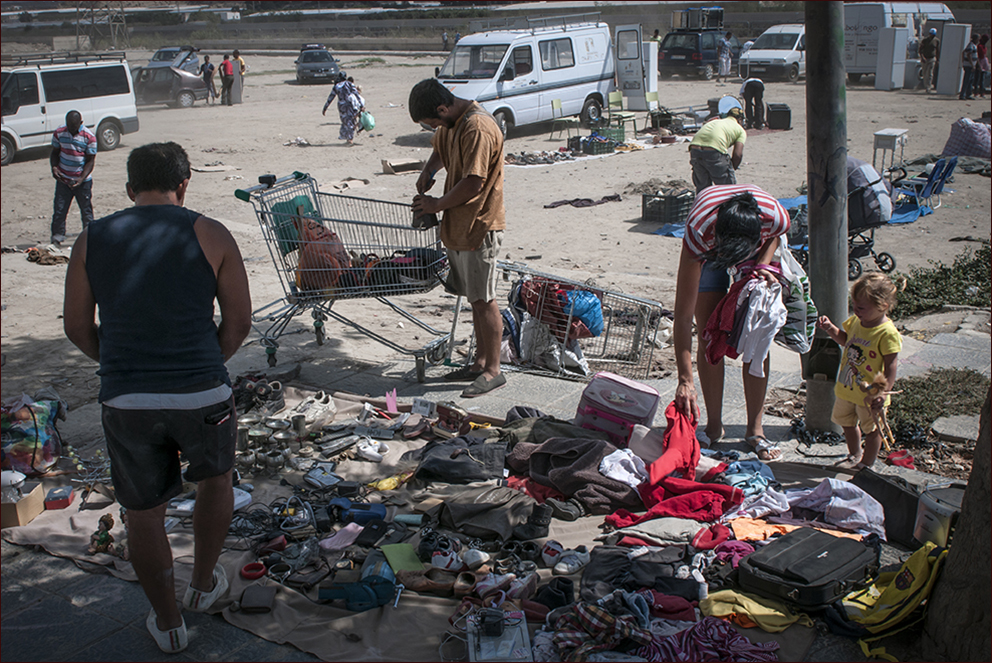 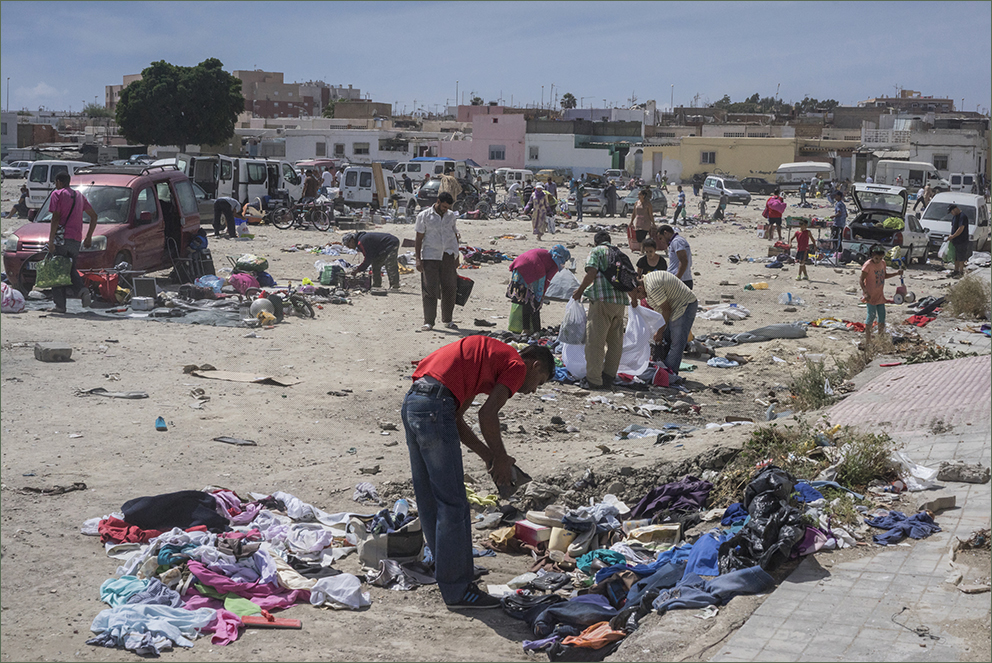 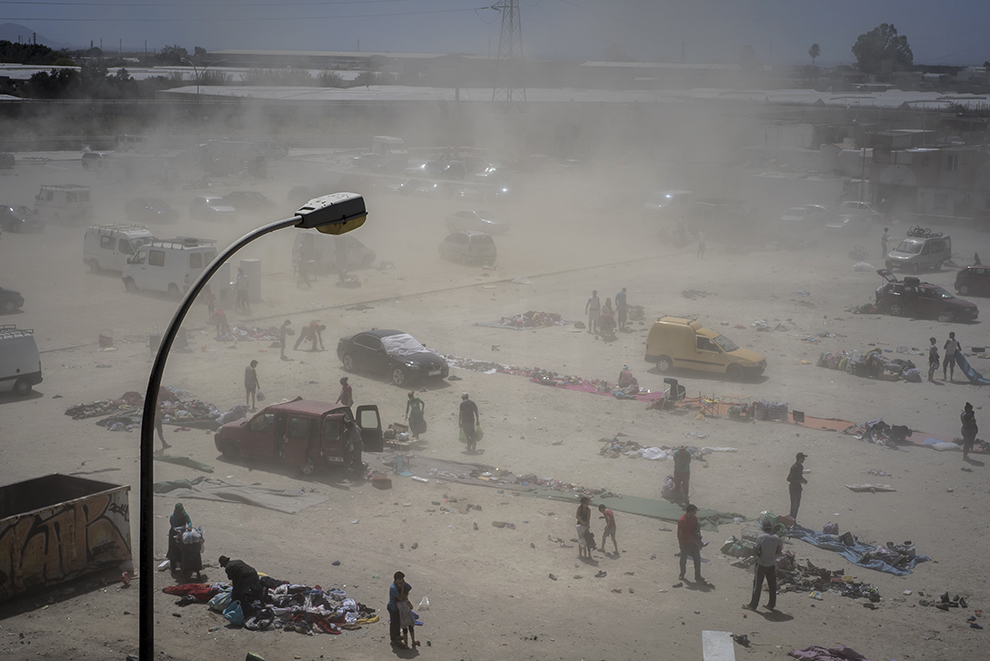 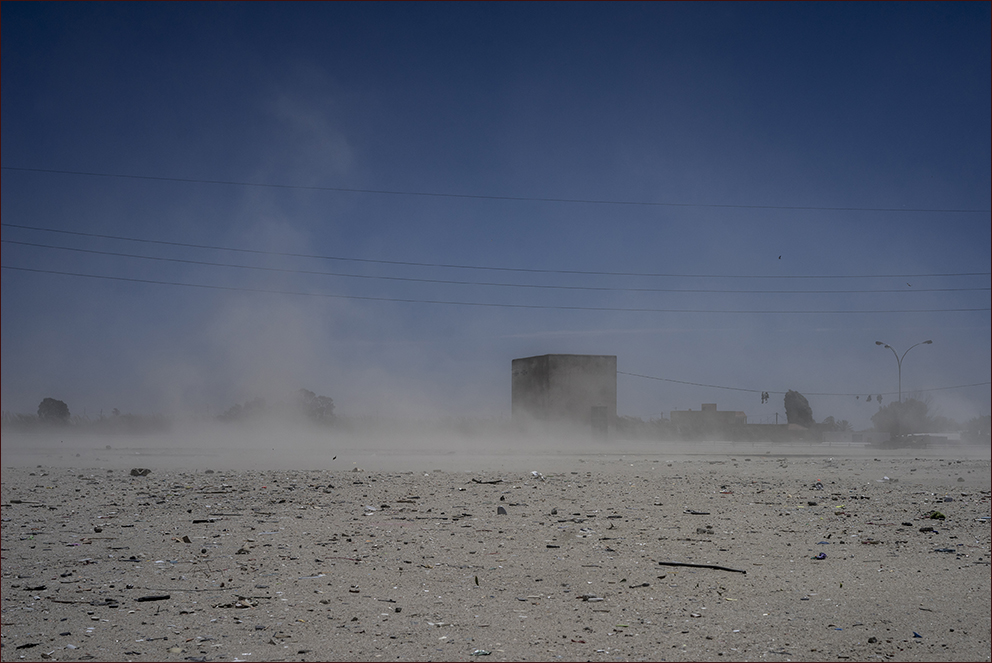 Luckily, though, public uproar did not shut down the market. The nervy authorities sent a team to clean the accumulated mess, warning that more garbage at large would certainly mean a swift, irreversible lockout. It was the opportunity for El Mehdi to pressure vendors, newspaper clips in hand, to pay a fee, promising in exchange that he would manage a small local crew to clean the market place. Although not everybody complies, he admits, the modest revenues allow him to contribute, textually, to his “dearest duty” as a the “proud” European citizen he is: to secure the future of the Al-Ishan mosque. ©flc54